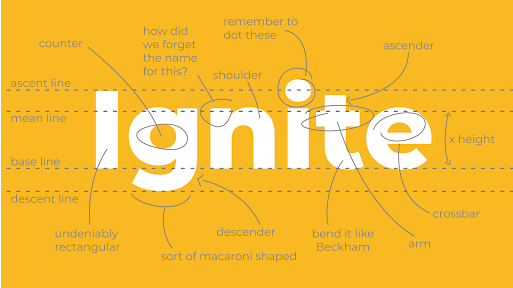 As a designer, I like to think that most everyone has taken a moment to think about why, out of all the typefaces in the world, one specific one got picked to enhance a visual message. Whether it’s a book cover that made you look twice, or when a playful bunch of bubbly letters on a candy wrapper has caught the eye of a bunch of soon-to-be-sticky children. Perhaps the simple confidence of a bank’s name in an honest san-serif shows you that you can trust a financial institution that can keep up with the times without needing to cater to fads.

More often than not, however, we aren’t even aware of the way something as mundane as a letter shape nudges our perception of the information we take in.

During a meeting last week, the topic of lettering came up and I caught myself staring at my coworkers in their little Zoom mini-windows as our boisterous conversation found itself in the doldrums for a moment. To give the doldrums metaphor more credence than it ever deserved, we all seemed to look at each other’s screens with bated breath.

The speakers on our computers suddenly filled that void with a sudden raucous free-for-all as we began several soapbox-worthy outbursts about the value and use of the fonts we had secretly been holding close to our hearts. It turns out that while each of us has a varying degree of interest and experience with choosing the letters that are going to represent one of our clients; when it comes to our favorites, we are as aggressively protective as a pack of angry wolves. Keep reading to get a quick highlight of the brawl in no particular order.

Avenir was one of the ones we found in our hearts and didn’t even know it. This shapely, open font is approachable but still classy and works great as a headline or copy. The versatility of this typeface is one of the reasons we keep it in our back pocket as a nearly universal just-in-case.

As primarily digital designers, we rely on san serif fonts pretty regularly, but with an abundance of san serif fonts, we need contrast! And where better to find it than this classic-but-still-unique typeface modeled after the transition of hand lettering as the western world switched from quills to metal pens.

Long ascenders and descenders lend a high level of adaptability and just the right touch of class to this timeless font, creating anything from thin understatements, to the casual grace of a good form, to bold standalone statements. Ever wondered why the typography in Wes Anderson movies just gets you? Look no further.

We love Cubano’s fresh super-duper-friendly look but we love what it says when we put it out on the internet. Trustworthy, easy to understand, and fresh without being pushy.

ANTON (AND HIS LITTLE BROTHER ANTONIO!)

A close cousin of Alternate Gothic, this modern spin on a nearly century-old style is one of our favorite bold fonts. Short ascenders and descenders keep it casual and let us be loud without yelling.

Functional and inviting with a hint of playfulness, Brandon Grotesque is a typeface that at first feels very niche but we have found it to be something that can be used in a wide array of applications. This easy-to-read mixture of digital and Bauhaus makes our hearts melt every time we see it.

Not many serif fonts made it onto our list, which isn’t super surprising as most of our work is digital, but we love Nixie One.

It feels like Courier New’s nerdy kid came back from summer camp with an awesome haircut and is making the cool kids wonder if they need to start wearing lensless glasses.